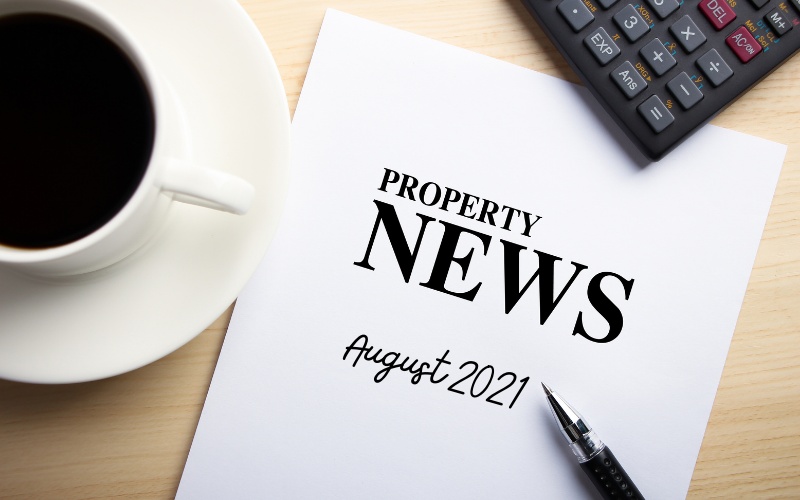 The UK’s property boom appears to be coming to an end following the winding down of the stamp duty holiday, and the number of properties currently up for sale has fallen to a new low.

Read on to find out more, with some of August’s key headlines:

The figures are now in and house sales tumbled by a whopping 62% in July, as thousands of buyers rushed to complete their purchases before the stamp duty holiday ended on 30th June.

Although the stamp duty holiday remains in place until the end of September, the threshold has been lowered significantly, with a maximum saving of £2,500 now available to buyers.

The scheme was introduced by Chancellor Rish Sunak to stimulate the housing market at the height of the Coronavirus pandemic, and it’s been largely hailed as a success, with some areas of the country seeing record price rises as demand for new homes soared.

Demand for new houses is predicted to remain strong, however, the picture will become clearer over the last few months of the year, with the stamp duty holiday and the furlough scheme for employees coming to a close at the end of September.

The number of homes on the market has fallen to its lowest level in more than 6 years, and property experts are forecasting that this will remain the case well into the new year.

The stamp duty holiday led to 1 in 20 homes changing hands over the past year, and the number of buyers continues to far outweigh the number of homes for sale.

This is particularly good news for sellers, with the buying frenzy leading to bidding wars between buyers, especially on 3 and 4 bedroom family homes, as the shift in working patterns over the past 18 months has led to buyers looking for more space.

While the Chancellor’s stamp duty holiday has largely been heralded as a success that has kept the housing market afloat, a leading think tank has concluded that it’s actually been ‘wasteful’ by the government.

The report published by the Resolution Foundation claims that buyer demand, and not the stamp duty holiday has been the driving force behind the surge in house prices this year, fuelled by low-interest rates and a shift in circumstances, with many buyers now working from home regularly, and looking for houses with more space.

The report goes on to say that the government’s stamp duty holiday has in fact cost them around £4.4bn in lost taxes, and has therefore been ‘wasteful’, given that they believe price rises would have occurred anyway due to increased buyer demand.

A report by Halifax has revealed that Winchester is now the UK’s least affordable city for buyers, overtaking Oxford in the annual survey.

Homes in the Hampshire commuter city cost 14 times the average earnings for buyers, with the average asking price for a house currently standing at £630,000.

Londonderry in Northern Ireland is the most affordable city for a third consecutive year, with homes costing 4.7 times the average earnings for buyers.

A recent study by leading property website Rightmove has revealed what buyers can get for the average asking price in each region.

The national average is currently £337,371, with London unsurprisingly being the highest-priced region. In fact, the difference between the capital and the lowest price region – the North East, is an enormous £470,000.

The average asking price in the capital is currently £635,000, which according to the report, will get you a three-bedroom Edwardian terraced house in West Ealing.

Meanwhile, for the North East’s average asking price of £165,000, you can purchase a modern, three-bedroom semi-detached house in Sunderland.

The largest house relative to its asking price is in Yorkshire, where a five-bedroom, three-story end-of-terrace cottage in Huddersfield can be snapped up for just over £210,000.

For more property news and updates and a more detailed overview of the South West area, get in touch with BOP. We are your local property experts. Call us on 01237 479999 or email info@bopproperty.com